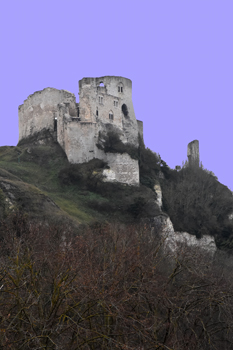 "How beautiful is my one-year-old daughter," Richard Lionheart would have cried out in front of this formidable building designed to control the Seine and the gateway to Paris.

Situated in the small town of Les Andelys, in the Eure, in the heart of the Norman Vexin, on a rocky spur overlooking the Seine by about 90 meters, the medieval military fortress of the 12th century is distinguished as much by the complexity of its plan as by the splendid view it offers over the meander of the Seine and its limestone cliffs.

Come and evoke the wars between France and England in the 12th century, between Philip Augustus and Richard the Lionheart or John the Landless, but also the Cursed Kings, when the adulterous wives of the sons of Philip the Fair were locked up there.

Come and discover at last the high and low courtyard, dungeon and moat, and all the military architecture of an emblematic fortified castle!